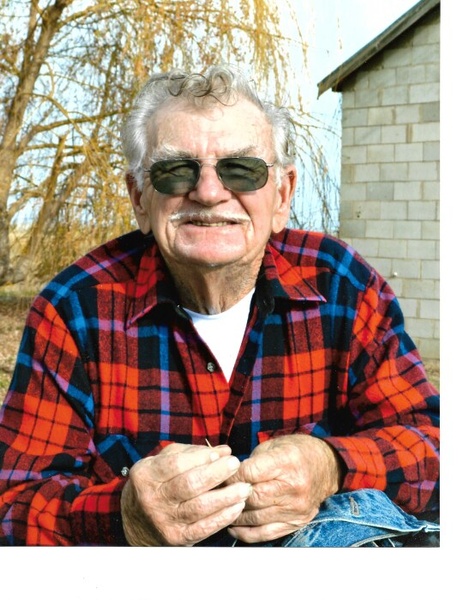 Frank graduated from Hagerman High School then served in the United States Marine Corp. from 1954-1957, in San Francisco, CA for 2 years, and then in Japan for 1 year.

Frank married Bobbie Claudine Johnson on June 2, 1958, in Burley, ID.  Together they raised 5 children: Lois Christine Murphy, Beulah Joy Murphy, Westley Eugene Murphy, Kathleen Marie Fish, and Raymond Orvid Fish.  He moved with his family to Jerome from Hagerman in 1969, where he farmed.  He worked for the Sugar Factory for a short time and then worked for the canal company in Jerome.

Frank is survived by his children Beulah, Kathy (Robert), and Raymond; daughter in law Linda Murphy, as well as 9 grandchildren, several great-grandkids, and great, great grandkids, his brother-in-law Grant Jennings, and several nieces and nephews.

Frank was preceded in death by his loving wife Bobbie, his children Lois and Gene, his sons-in-law Bob O’Connor and Dave Landers, his mother and father, and all his brothers and sisters and their spouses.

Frank loved to fish and do woodworking.  He was a very loving and humorous individual; some say he was a jokester.  He loved huge family get togethers and was very family oriented.  He was a delight to his grandchildren, and he was always there when they needed him the most.  He kept all of the kids in line and loved his loyal dog Fluffy.  He was a wonderful man and will be deeply missed by all who knew him, and he will remain in our hearts forever.

No services are scheduled per Frank’s request.  Arrangements have been entrusted to Demaray’s Jerome Memorial Chapel.

To order memorial trees or send flowers to the family in memory of FRANK FISH, please visit our flower store.