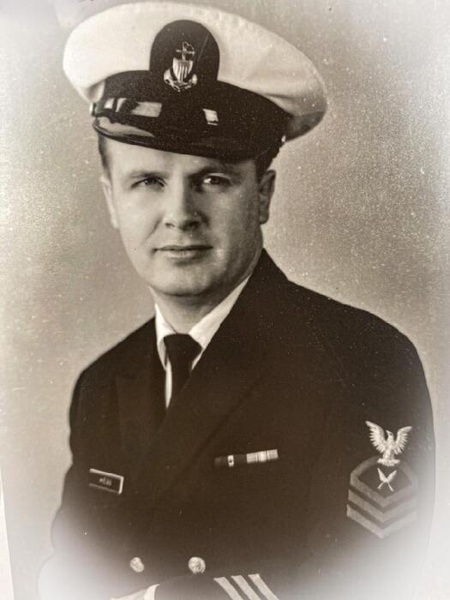 Hal and Pam were married and sealed for time and all eternity in the Idaho Falls temple of the Church of Jesus Christ of Latter-day Saints on November 13, 1959.   The majority of Hal’s education came from the school of hard knocks.  He was a self-made man, first building a distinguished 20-year career with the United States Coast Guard (after a short time in the Idaho Army National Guard), including

several years aboard the USCG icebreaker Eastwind (WGAB-279), and the USCGC Hamilton-class high endurance Jarvis (WHEC-725).  He and the family were stationed in Boston, Hawaii, Japan, California, and Washington, DC. He ultimately worked in the USCG headquarters in Washington, DC and retired in 1977 at age 37, as a Chief Warrant Officer.  Hal then completed a second career—with no formal education or degree—as a Financial Services Officer for what was then Ricks College, in Rexburg, ID.  Hal attended Bonneville High School from 1954 to 1956, then completed his GED ahead of his graduating class in 1958. He served with the Rotary Club in Rexburg, ID. He enjoyed his service and affiliation with the American Legion in Washington, Utah, including participation in parades and other events.

He was a bishop in the Church of Jesus Christ of Latter-day Saints at age 23 in Kaneohe, Hawaii.  He also served on several high councils and bishoprics for the Church. Hal loved the outdoors.  At the age of 59, he completed the over 2,000-mile Appalachian Trail. (Pam was able to complete over 900 miles of that journey.) Hal earned a pilot’s license in 1969. He also loved to take trips with the family on his Honda Goldwing motorcycle to many destinations around the United States. He donated 22 gallons to the American Red Cross.

Ultimately, Hal felt the greatest accomplishment of his life was his family, and he had an enduring love for all of them. Hal’s greatest legacy his example of self-determination, hard

work, and service to in his faith, country, and community. “Countless miles traveled; many mountains climbed; thousands of memories made, one blessed family”.

A memorial service will be held on July 31, 2020, 1 pm, at Fielding Memorial Cemetery, Idaho Falls, ID.  Arrangements are under the care of Demaray’s Jerome Memorial Chapel.  Condolences can be left on Hal’s Memorial Page at demaraysjerome.com.  Due to COVID-19 issues face masks and social distancing are suggested for the services.

To order memorial trees or send flowers to the family in memory of HAL HESS, please visit our flower store.