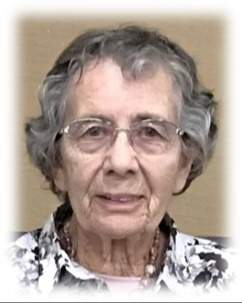 In Loving Memory
Harriett (Washburn) McCord, 93, of Jerome, Idaho, passed away peacefully at her home on August 15, 2022, after a sudden illness.

She was born February 2, 1929, at St. Valentines Hospital in Wendell, Idaho, to Roy and Hazel (Blakemore) Washburn.  She graduated from Jerome High School in 1947.

Harriett married Lloyd McCord on January 31, 1954, and they started farming in Wendell.  A few years later, they purchased the farm and dairy in Jerome that her parents started in 1937 from the Carey Act irrigation project.  The original 40 acres grew to 500 acres with crops of alfalfa, corn, barley, and wheat.  The farm evolved to include hogs, beef cattle and a new dairy barn and large herd of cows as the children became more involved in the operations.

From an early age, Harriett helped her father with farming, threshing, and caring for farm animals and horses.  Her roots were deep in the farm, and she worked to grow and improve it her entire life.  Harriett also raised a large garden every year with vegetables, fruit, and beautiful flowers.  Gardening along with reading were special lifelong hobbies for her.

Harriett shared her farming knowledge and love of history with the community as a board member of the Jerome County Historical Society for many years.

She was preceded in death by her parents, Roy and Hazel Washburn, her former husband, Lloyd McCord, and her daughter-in-law, Helen McCord (Tom).

In lieu of flowers, memorial contributions in her name may be made to the Jerome County Historical Society.

To order memorial trees or send flowers to the family in memory of Harriett I. McCord, please visit our flower store.