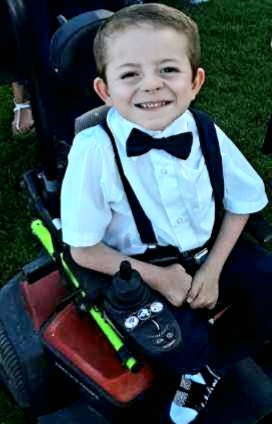 ONCE UPON A TIME, Tyrell Robert Johnson, was born to Kallie and Adam Johnson on November 29, 2013 in Twin Falls, Idaho!

He had two sisters, Lyla Lea and Kassadee Kay.  At 18 months he was diagnosed with SMA – Spinal Muscular Atrophy.  At that time, the doctors stated most children with this diagnosis do not live past 2 years old…. the family gathered, fasted and prayed.  Within months, Tyrell was included in a study for a new drug to help stop the atrophy by Primary Children’s Medical Center.  He spent the next 5 years traveling to Salt Lake City for treatments.

Tyrell was a pro at video games and was particularly fluent with The Switch.  He loved spending time with his family camping, boating and following his sisters to ballgames.  His attitude toward life was incredibly positive and he never gave up.  He played with the kids in his wheelchair and depended on his family for every need and they all were honored to assist.

In March 2020, his family purchased a home in Jerome.  He was excited to have a new home and spent time designing his comfy place.  Ty suddenly left us there on Dec. 12,2020.  He is now running and jumping in Heaven.

The family is forever thankful for the many caregivers that shared in Ty’s life: Primary Therapy, Shriner’s and Primary Children’s Hospitals.  Ty is now leaving much needed information to help other children in the future.  We will all live HAPPILY EVER AFTER.

To order memorial trees or send flowers to the family in memory of Tyrell Johnson, please visit our flower store.